Many people are convinced that building a strong and shredded physique is not possible without the use of illegal steroids. Can you spot the difference between a roid and a natty? Let’s talk about Chris Jones, the founder of Physiques of Greatness.

Born in March 1986, Chris Jones comes from Dallas-Fort Worth, TX. He is popularly known as Beast Mode Jones. A personal trainer and fitness motivator has two YouTube channels which both command a following of one million subscribers. The two channels are PumpChasers and Physiques of Greatness. His most viewed content on YouTube is the Epic Deadlift Party that is hosted by CT Fletcher. He is also the founder of the Pump Chaser line that has over 300,000 Instagram followers.

Chris Jones started his journey as a fitness coach in December 2011. He began by uploading videos on nutrition and bodybuilding which allowed him to build a wide fan base. After a few years, he gained enormous attention and used fame to advertise his brand. His supplement business, clothing line, and personal training classes became successful. That is why he is one of the recognized businessmen and fitness gurus.

Natty or not is probably the greatest debate that has ever been raised concerning Beast Mode Jones. Has he bulked naturally or are there some drugs on the mix? Does he look like a steroid shopper? This is a seemingly endless argument. You will find the answers at the end of this post. But before that let’s analyze facts that may hint at Chris Jones being natural or juicing up.

Any athlete using steroids has to train in the gym and diet. The drugs provide an extra push but they come with a price. It is generally known that black men like Chris Jones from Physiques of Greatness carry superior genes for muscle building. Their testosterone level is higher than that of Asian or White men. It is for the same reason black women have more curves compared to white women. So, it is normal for a black man to have a sculpted figure.

How to Tell if Beast Mode Jones is Juicing Chris Jones stands 5ft 7inch tall and weighs 177-200 pounds year-round. It is not easy to tell if Chris is on drugs. Many drug users still look normal, just like Chris Jones. This is why we need to use feasible methods to detect is what Chris has is naturally attainable or impractical. We shall use the following pointers to assess his natty probability:

Did Chris Jones from the Physiques of Greatness Suddenly Become Strong?

From his photos of 2009, Chris weighed 160 pounds. By 2010, he had added 40 pounds so he was 200pound heavy. He bulked up without showing significant muscle separation. It means that the 40 pounds were mostly fat gains. In 2011, the year he started serious training, Jones weight dropped to 177 pounds, which would be contrary to the principles of steroid use. He had been lifting weights and this explains why he got in shape. Anyone can naturally drop such pounds with regular training. So we cannot say that steroids were involved.

Anyone who starts weightlifting regularly is bound to gain more strength. In the beginning, the body is highly responsive to training and has a bigger room for improvement. This is known as newbie gains. But a sudden gain in muscle and strength could be an indicator of steroid use. In his first years of proper training, the journey was not always smooth. Chris endured so much criticism, especially on his videos. Most critics claimed he was not natural but this did not stop him from furthering his quest. He used high-volume training and advocated for the same. He insists that training with high volume and eating right eventually leads to growth. His routine starts with heavy compound exercises followed by isolation workouts. Each workout session comprises 5 sets. This means 20 sets every day. Sometimes he does 40 sets within one workout. According to Chris Jones, this high-volume training has earned him the current physique.

Jones Traps, Massive Chest, and Shoulders: Are they Indicators of Drug Use? 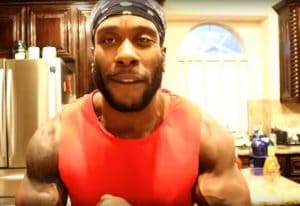 The concentration of androgen receptors is higher in the chest, traps, and shoulders in comparison to other body parts. These are special kinds of protein cells that respond to anabolic agents like testosterone which is common in steroids. If Beast Mode Jones has been on steroids since 2011, these muscle groups would have had an overdrive. He would have developed into an enormous beast than he looks like today. But Chis is not abnormally large. He is simply genetically endowed with black male genes. This has given him gradual gains through consistent gym training. Steroid shoppers who train alongside Jones may have reached an abnormally bigger size. FFMI or the fat-free mass index determines the amount of muscle per unit of height. There is a close connection between Chris Jones’s height ad muscularity. If he were a steroid user, Chris would be having a higher FFMI.

As a natural bodybuilder, Chris Jones from the Physiques of Greatness has been able to attain a lean and dry shape. He doesn’t necessarily show the coveted 3-D silhouette that is common amongst SARM shoppers. The social media haters don’t understand that Chris carried lots of muscle even before he started to build his image. What happened is that he shed the excess fat that was covering his muscular definition. Through proper nutrition and targeted workouts, Beast Mode Jones retains his muscle that he gains during his bulking cycles. This is possible for any natural bodybuilder who knows what they are doing. If he only added muscle and lost fat simultaneously, we would have concluded that he is on steroid. But he hasn’t added an extremely huge amount of muscle.

Not Easy to have Big, Lean, and Strong Figure All-natural bodybuilders can only choose two options at a time:
• Big and lean
• Lean and strong
• Big and strong

No magic genie in the world of fitness can be strong, big, and lean without the use of performance-enhancing drugs. Anyone who wants to be strong and big should forget about a lean body. Similarly, if you want to be naturally big and lean, forget about massive strength. If you look at Chris Jones, he is lean and strong but not overly jacked. If he were dripping steroids, he would be pressing harder to gain gargantuan amounts of kilos. Take a keen look at the men in the gym. The biggest tend to be the strongest. But if they are also the leanest, know that steroids are part of their regimen. Simply put, the leaner the natural physique, the stronger the body and the lesser the muscle mass.

Proper training and nutrition get the body lean and dry. But maintaining an outstanding muscle separation the natural way is hard work. The human body is not preordained to stay lean. That is why Chris Jones adheres to a strict workout routine. Some degree of muscle imbalance is common in a natural bodybuilder. It is not easy to attain the perfect size and symmetry in all major muscle groups. This is the case with Chris Jones. If you look closely, some of his abs and calves lag in size and leanness.

No Acne or Male Pattern Baldness

While some bodybuilders are vulnerable to baldness and skin breakouts, steroids are the biggest aggravators of these issues. None of these side effects have been spotted on Beast Mode Jones. Neither his nor back is covered with acne. His hairlines are intact and not receding like in the case of steroid shoppers. He doesn’t need to hide anything under photoshopped pictures when posting online.

Steroids have been around for decades. Many fitness enthusiasts claim to have built their brands with training, supplementing, and hardcore training. Some have built freakish body sizes and shreds. But more often than not, anabolic steroids, SARMs, or HGH are the culprits. This trend is considered fraudulent as it encourages young people to chase unrealistic dreams. As such, it is worth identifying iconic people who are natty or roid. We can categorize Chris Jones, the founder of Physiques Greatness as a natty bodybuilder. Our most surefire ways for arriving at this verdict are:

In 2009, Chris Jones was lifting weights and later spent a whole year doing dirty bulking. He has a significant increase in body fat percentage but later cut to lose excess weight. The 17 pounds of lean muscle that he added are achievable for any natural bodybuilder out there. If he has been on steroids, we would have spotted some side effects like gyno, gray hair, wrinkles, and flushed skin. He is also a strong advocate of eating big to get bigger in addition to high-volume training. He also insists that the best method for men to gain mass is through bulking followed by a cutting phase. In a nutshell, Chris Jones of the Physiques of Greatness is a true natural bodybuilder.