If you are a keen follower of the bodybuilding community, then you must have come across Kali Muscle. His story is both fascinating but often raises eyebrows. Being a popular figure in the industry, Kali Muscle evokes admiration, controversy, and hatred among his followers. So what are the reasons that make him famous? What is the truth about the rumors concerning his steroid-based success? Here, we shall be answering the question of whether he is natural or using performance-enhancing drugs.

He was nicknamed Mr. Muscle for good reasons. He is quite a monster, standing 5’6″ tall and weighing 240 pounds. It is true a lot of guys out there weigh more than 240 pounds, but it is usually fat. Being out of shape at 240 pounds is easy, but remaining fit at 240lbs is hard work. It would thus be an understatement to say that Kali Muscle is in shape. He is monstrous. His muscle definition and vascularity are simply on another level. He has visible abs, and his body fat averages 7% offseason and 4% when competing. Does he attain such low-fat content thanks to his god-tier genetics or steroids?

Anabolic steroids are common in the bodybuilding community for many reasons. They are dangerous but highly misunderstood. Bodybuilders don’t just inject themselves or swallow the pills then relax to see their muscles expanding. The users are required to work extra harder because it gets harder to hold on to the gains after coming off the steroid cycle. Kali’s physique can be described simply as freaky. This is one of the reasons many accuse him of being on steroids. But the majority of trolls are jealous of his success. 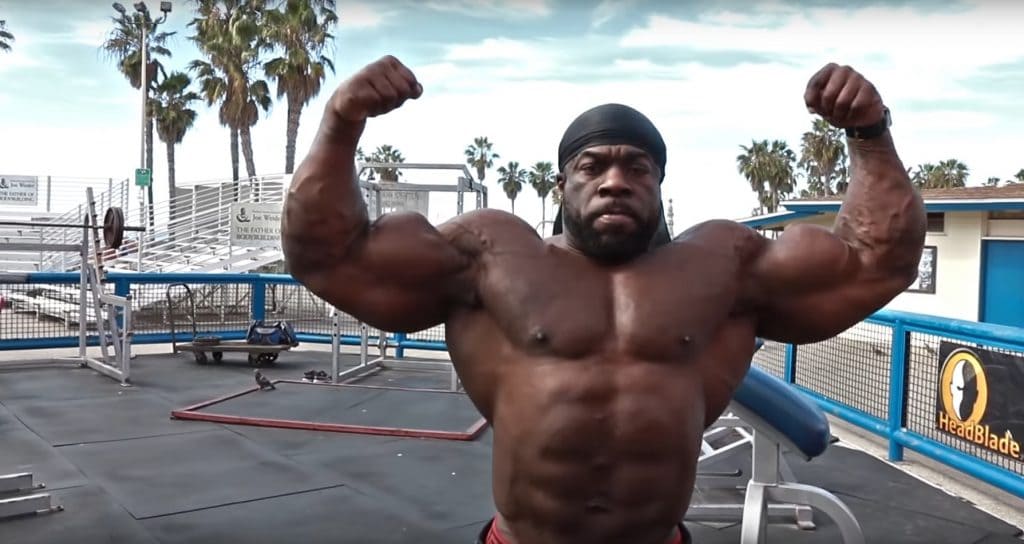 What could be more interesting than a guy who has served in jail for robbery and later came to draw over 2 million followers on social media? His career is skyrocketing, and has become one of the most talked-about bodybuilding champions. He is not only a social media fitness guru but also an actor and entrepreneur. Kali Muscle doesn’t reveal his real name, probably because of his gang affiliation and a criminal past. But he is now straight, enjoying the rewards of reforming.

Born in 1975 in Oakland, California, Kali Muscle grew up in a rough environment that has a reputation for gang activity. Back then, the city of Oakland was not for the weak, as criminals were everywhere. For Kali, staying at home was not an option. He was raised by a violent stepfather, and he would avoid trouble by going to the gym after school. He started working in a gym in his teen years just to get a membership and make some cash. He was not good at academics, but he excelled in sports. He showed great potential in wrestling and football. He even attended Fresno State University through scholarship because he was too good at college football. Things got tough when his brother accidentally shot himself and died. That is when Kali lost his focus and joined the wrong crew that was known to indulge in crime. He regrets to date because his behavior got him spending 11 years behind bars.

While in prison, Kali trained every day to build muscle. He first worked with weights, but the guards took them away when they suspected Kali Muscle could use them as weapons. Kali learned to exercise without the weights. His passion for bodybuilding did not die. He incorporated plyometrics that included burpees, push-ups, crunches, and squats. By working out conscientiously, Kali’s body responded favorably without fail. When he got out of hail, he kept pushing his career and started participating in bodybuilding shows. It was in 2012 when he earned the Mr. California title. Immediately he landed some acting roles and became a motivational speaker. He was mainly speaking to kid, encouraging them to follow the right path, so they don’t end up in prison. He wrote a book known as Xcon to Icon that made him even more popular. With his insane physique, he has gained over 2 million followers on social media. He is grateful that working out helped him to reform and put behind a criminal mindset.

There is a huge YouTube fitness community that presents a wealth of opportunities for people to market themselves and make money. Kali Muscle has not missed this chance. But since other bodybuilders are doing the same thing, he has to strive and remain competitive. Many YouTubers have accused him of buying PEDs from Richard Rodriguez, the founder of Miami’s Iron-Addicts Gym. They even accuse him of recommending steroids just to make money. He denies all allegations, claiming that those channels are using him to create a controversy to increase their YouTube subscriptions.

Why People Think Kali Muscle is on Steroids

There are a few things that might lead you to think that Kali is on Steroids.

• Dramatic Spike in Gains
The history of muscle gain tells a lot about steroid use. It is hard to believe that someone would naturally make tremendous gains like Kali. In the absence of steroids, muscles usually develop slowly. If you look at Kali’s bodybuilding journey on YouTube, he seems to have gained massively between 2009 and 2015. His traps are among the muscles that have changed to a great extent. Other prominent parts are the shoulders and a big waist.

• Synthetic Figure
The most obvious sign of steroid use is a synthetic appearance. Kali’s muscles, as they appear in photos, do not look natural. They are like filled balloons.

• Vascularity
While Kali Muscle has been huge since his teenage years, his current vascularity seems like a new thing. From his pictures, his veins are highly conspicuous. This could hint at the fact that he is using steroids.

• High blood pressure
Someone with high blood pressure sometimes has to catch a breath in a heated activity. Kali Muscle has been seen on videos gasping for air and pausing, meaning that his flow of blood is not at its best. This shows that he is straining as he exerts his body, and when talking. Perhaps Kali uses insulin- one of the drugs that raise blood pressure. But Kali has denied taking any supplement.

• Distended stomach
Steroid users are known to have a bloated stomach or the so-called roid gut. Performance-enhancing drugs have the potential to trigger the storage of visceral fat and an increase in the connective tissue, ascites fluid, and pelvis thickening. This is one of the evident signs of HGH use on Kali Muscle’s photos.

Kali competed in the IFBB and won. Anyone who participates in IFBB has to be drug tested by NPC, which is considered a natural organization and drug-free platform. But we cannot assume that Kali is natural since NPC hardly lives up to its standards. Their current policies seem to be encouraging participants to use steroids because they test them after the competition. No random tests are done to catch drug users. As such, the open secret allows NPC contestants to take PEDs discreetly. So, competing and emerging a winner in NPC is not enough reason to make Kali Muscle natty. We would have believed him to be natty if he ran in contests with strict drug-testing standards like BNBF and IBNA. These two carry random tests when the participants least expect.

He claims to be natural and insists that taking steroids in prison is impossible. He adds that getting steroids as a black man in prison is even harder. He asserts that after jail, he did not need to use supplements. And that the majority of his gains happened while serving his jail term when he would do 4000 calories per day. Kali acknowledges the allegations of using steroids but avoids all discussions regarding performance-enhancing drugs. He only answers when pushed, and if asked directly, he denies. He can laugh nervously and changes the subject as quickly as possible. Kali claims that he has superior genes and was born to be a bodybuilder.

The NPC never publishes the drug test results. So, it is not an effective way to determine his nattiness. He might have planned his cycle to avoid being caught. The most likely culprits are HGH (human growth hormones) and insulin. But we wouldn’t understand Kali Muscle’s decision to take the drugs because he is naturally big. It appears that he is not truly honest regarding drug use. But this should not be a reason for people to hate him.

He recorded his greatest gains in the period of 2009 to 2015. For six years, he has increased in vascularity, traps, and shoulders. A high level of insulin increases the diameter of blood vessels, increasing the amount of blood flowing to the muscles. This can be one of the ways Kali enhances his vascularity. His waist seems bloated despite having ripped abs. The reason we suspect he could be on HGH is his bloated stomach. Though not a steroid, HGH is known to cause Palumboism in high doses. Bodybuilders use it to boost muscle growth and gym performance. A higher dose can lead to swelling of internal organs, making the abdomen look swollen. Kali seems to have Palumboism or HGH gut like Mike Rashid.

Based on the above evidence, we believe that Kali Muscle could be on an HGH cycle rather than steroids. So, he might be steroid-free but not 100% natty.